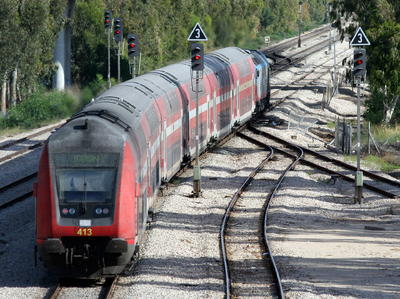 Following the success in the tender, a framework agreement was signed between the Czech company AŽD Praha and Israel Railways Ltd. for supplying non-invasive diagnostics of switch points in the Israeli Railways network.

The contract was signed for three years with the possibility of extension for another three years on the basis of the unit prices won in the tender. Israeli Railways will gradually order the required diagnostic equipment from AŽD Praha to individual railway stations.

Diagnostic system produced by AŽD Praha is designed so that it does not interfere with signaling and control systems in the Israeli Railways network. The infrastructure manager will have a perfect overview of the electrical as well as the mechanical condition of the individual switch points. Not only that he instantly learns about the acute failure of a particular switch, but the system will also warn well in advance that service is required on the point machine to prevent its possible damage.

“In the first phase, this is a pilot installation of the value of about 115,000 EUR, where we must demonstrate to Israel Railways our both technical and commercial quality. The pilot project will then be evaluated, and if the customer is satisfied, the door for orders to other stations will be opened. This is a very prestigious project for AŽD Praha and we believe that we will convince the customer not only by the quality of our technology, but also by our professional approach,” says Zdeněk Chrdle, CEO of AŽD Praha.

At present, large-scale railway projects are under preparation in Israel which is a major challenge for a number of qualified companies in the field of telecommunication and signaling equipment. AŽD Praha will definitely not stand aside in this process and is already preparing intensively for the expected public tenders.