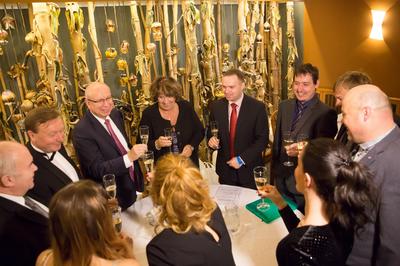 Ústí nad Labem Region concluded a contract with the railway carrier AŽD Praha for the operation of transport on the line Most - Lovosice - Litoměřice. The daily operation of the trains will return to the Plum line from December of the next year. The contract signed on 12 December 2018 by Ústi Region Deputy Jaroslav Kominek and AŽD General Director Zdeněk Chrdle is concluded for ten years at a price of 108.50 CZK km.

„For our company, the recovery of full operation is a big challenge. We will be happy to offer a number of additional services to passengers in the train, "said Zdeněk Chrdle at the contract signature. In the year 2019, the carrier and the Usti Region will launch an information and promotional campaign aimed at returning passengers to this line. During the winter, AŽD Praha wants to carry out other modernizations and increase the line speed as well as to elevate some platforms in order to make the entry to the low-floor trains really simple.

The Governor of the Ústí region Oldřich Bubeníček spoke about the news on the line at a traditional Christmas meeting with AŽD Director Zdeněk Chrdle. "I believe that the renewal of traffic will significantly improve the transport service to the citizens of communities of the Central Bohemian Highlands. The line can serve not only to trips, but it will also have a place in the everyday life of the region, "the Governor Bubeníček wished.

The transport will be provided by the modernized low-floor Regiosprinter units, which will be adjusted to the green colors of the Transport of the Ústí Region. Trains will drive from Most to Lovosice and Litoměřice every two hours, the traffic between Trebívlice and Litoměřice will be increased to half, i.e. the hour interval. On the trains the DÚK tariff will be valid, where for each passenger it is possible to transfer with a single ticket between all trains, buses and almost all public transport in the Ústí nad Labem Region. It will be possible to purchase the tickets directly in the train, of course also throughout the region at all points of sale and on all buses of the Transport of the Ústí nad Labem Region.

The operation of trains at Most - Lovosice line ended at the end of 2007, when the region stopped its ordering due to lack of use, low speeds and overall low traffic attractiveness without any hope of improvement. In 2016, AŽD Praha bought the track from the state and, as a leading company of railway signaling technology, started to invest massively in the track to make it a modern regional line of the 21st century. Thanks to this, the track is ready for operation in completely different parameters than 11 years ago.

The Plum line runs along the southern foothills of the Central Bohemian Highlands, e.g. through Libčeves, Třebívlice and Třebenice villages.