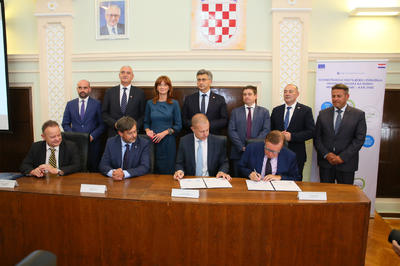 The Czech company AŽD succeeded with its offer in the tender for the supply of signalling and telecommunication technology for the railway line Hrvatski Leskovac - Karlovac and concluded a contract for the work in Karlovac, under the presence of Croatian Prime Minister Andrej Plenković and Minister of Transport Oleg Butković, with HŽ Infrastruktura (Croatian Railway). AŽD will carry out its deliveries from the position of main contractor. The value of the project is HRK 263.5 million (approx. EUR 34.9 million) and the implementation will take 30 months.

"Croatia has been in long term one of the strategic territories where our company has always wanted to supply modern railway signalling technologies. For us, this first significant project is both the culmination of a tremendous effort and a great challenge to demonstrate the quality of Czech systems and the professionalism of AŽD. We feel committed by the trust in our company expressed by Prime Minister Andrej Plenković and Croatian government ministers at the signing of the contract," said AŽD CEO Zdeněk Chrdle.

The signing of this contract was preceded by a fierce competition, when the consortium of Alstom Ferroviaria and Končar – Inženjering did not hesitate to file a lawsuit with the Supreme Commercial Court of the Republic of Croatia due to the award of the contract to AŽD. However, the decision came in favor of AŽD. By signing the contract, AŽD confirmed its significant position in the Balkan countries, where, in addition to Croatia, it is currently implementing large-scale projects in Serbia, Montenegro and also in Bosnia and Herzegovina

The subsidiary AŽD Zagreb d.o.o. and other Croatian companies will also play a significant role in realisation of the Hrvatski Leskovac – Karlovac line project.