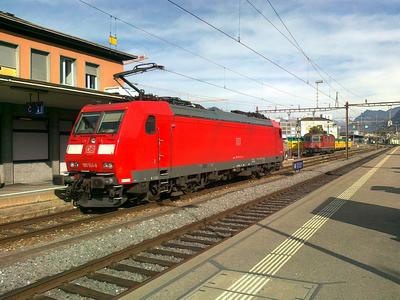 Since half of October 2020 real test rides of a freight train under control of an ATO (Automatic Train Operation) system along with ATP (Automatic Train Protection) ERTMS/ETCS (European Train Control System) system has occured on the Swiss Sierre-Sion line. A significant number of test trips is planned to be carried out on this line till half of December in order to demonstrate interoperability among systems supplied by several partners of the Shift2Rail Joint Undertaking.

The uniqueness of this activity consists in the connection of a so called ATO onboard part and a railway traffic management system along with a so called ATO trackside part, which provide, via online radio transmission, the test train with a current timetable and a track map. The ATO onboard controls the train operation throughout the whole trip based on the received data while the timetable can be updated at any time according to the current traffic situation. This leads to a significant time optimization of traffic and energy consumption savings.

The Sierre - Sion line is equipped with ETCS level L2 system and the operator and inframanager SBB has installed at its infrastructure the ATO trackside part, supplied by one of the Shift2Rail partners, so that it can connect to the onboard part on the locomotive. During the test trips, the train consisting of a DB Cargo locomotive with 14 freight wagons runs on the line under the control of the ATO system, fully supervised by ETCS. The system runs in GoA 2 (Grade of Automation 2) mode with a driver also on board, responsible to oversee the whole train operation. Among the range of several ATO onboard units from several participating suppliers, which are installed and tested one by one, also the ATO onboard system from AŽD undergoes tests during this vast test campaign. All communication and signalling interfaces are based on public specifications of the ATO over ETCS (AoE) GoA 2 system and should achieve full interoperability, which means that the onboard part of ATO can correctly interwork with the trackside part of ATO and the ETCS onboard part of other suppliers. So the main purpose of the testing is to check if the specifications can be consistently implemented in the prototypes running under real operating conditions with a clear focus on freight transport. The first successful runs show very good applicability of the specifications but the demonstration tests need to be completed so that the test results can be fully evaluated and the compliance of the demonstration prototypes to the Shift2Rail specifications validated.

"Promising first runs of the Czech system in Switzerland confirm that AŽD can boldly rank among the best technological companies in the world, determining the direction of modern control and signalling equipment on the railway," said the member of the ERTMS (European Rail Traffic Management System) Steering Committee at the European Railway Industry Association UNIFE Vladimír Kampík from AŽD.

The first ATO over ETCS tests on freight trains take place as a so-called "technology demonstrator" in the framework of a wide European cooperation within the Shift2Rail Joint Undertaking’s X2Rail-3 and ARCC projects. Shift2Rail is a public-private sector partnership set up and funded by EU in the frame of the Horizon 2020 programme in order to increase capacity and reliability and reduce railway life cycle costs. The demonstration and testing campaign in Switzerland is led by a German company DB Cargo embracing participants from the whole Europe, namely  AŽD, Alstom, Hitachi, Siemens, Thales. More partners of the X2Rail-3 listed at https://projects.shift2rail.org/s2r_ip2_n.aspx?p=X2RAIL-3  contributed to the specifications. Similar tests are planned for passenger trains next month on the British railway network managed by Network Rail.

AŽD, the acknowledged leader in ATO for mainlines having a track record of more than 300 vehicles equipped with their ATO technology, anticipates that cooperation with major players in the field of railway vehicle manufacture will be established very soon with the aim of incorporating proven ATO technical solutions for traction vehicles for both freight and passenger trains as a standard part of the equipment of new modern locomotives. This will enable end users to take an advantage of all the benefits of ATO system in the shortest possible time horizon, i.e. the already mentioned time optimization of railway operation and a significant reduction in energy consumption.